A five page letter from Helen Berry Lane discussing both local and family interests. She mentions the Brompton family in connection to a social event.

Your letters brought “hope defer’d” dearest Ma but it is a comfort to know that you have begun to think seriously of coming & may start next week, but there lies Georgetown in the way. I have written bragging Fan to come at once but her answer not arriving I fear she is away from home, I pressed her father to bring her & get hope that May will come & be here with Belle who is bent upon paying us a visit in a week or ten days. All this must be done at once for Mr. Johns has to preach in his Parish the first Sunday in Oct. & we shall have to go the [ ] day before. I shall stay two weeks.

I am going to take Charlotte to carry the baby & be useful while I am there & then Helen can look around & arrange for a nurse at her leisure. Mr. Hirt is so faithful & devoted to him that she has had no trouble whatever with him & he is so free from colic that you wld. not know there was a baby in the house except when he’s hungry.

I wound up the ailment I wrote you of on Thursday last with a big headache & have been remarkably well ever since except a cough wh. sticks to me like a tar baby that day I got a note from Lilly Marshall saying that she & Hermin were going to drive down on Sat. & pay us a visit Accordingly they came with Harry & Carter Scott as escorts. Mrs. [ ] Pagne & her son also of the party they stopped at Dr. Scott’s. Hennie drove. they will return on Friday. This has stirred us up considerably & pleasantly, the boys are having a gay time going to gosling parties & driving about, there’s to be a dance tonight at Timmy Green’s, given by all the boys. Hennie & Helen have just returned from a visit to Dr. Taylor’s in Hennie’s buggy. I don’t like such [ ] doings & Helen was very reluctant but did not like to refuse. We are having numerous jokes about Green & Lily wk: wld. take up too much paper, he was at the carriage door first man on Sunday & came up with Mary in the evn. dresses to death. By the way she is to be married next Wednesday at home in the day & leave that evn. for Winchester , I hear the Brompton family are to be invited, she is to board at a Mr. Ward’s next door to Judge Parker’s; I suppose it is Mrs. Bird’s house. I think Mr. Ward is her sister’s. The Baptist Ch’s a new thing in town to inquire who are its members. I’m afraid Mary will find herself in a sphere to wh. she is not accustomed, she looks lovely now. & I hear her betrothed says she is the purest Christian he ever knew. I am having no trouble with my housefull, the bread is perfectly beautiful & other cooking first [ ] & Fanny & Char. Doing their best so I really enjoy it like old times, we all miss you sadly Lilly just passed me and sent her love & great regret that you are away and David Forbes deplores your absence, always sends a message to that effect. He has been up several times lately.

Mr. Johns wears delightfully & is fine company for the girls. They all think Hennie is pinning for Spillman & tease her continually, she declares she don’t miss him at all, she’s very thin & pale but no sign of a fly about her. But [ ] with us, said Ellen was suffering with [ ] pain in her stomach. She seems to be in wretched health & looks worse than I ever saw her. This makes sister doubt about going to St. L. as she wold. not leave her sick.

The jasmine is blooming & the geraniums that you left so full of bloom are just as much so now & buds still forming, plenty of tuberoses too & loads of heliotrope. mignonette all dead as Hector.

We have not decided to send Harry back to the High School. Mr. L. is inquiring about the Balt. Business College & his reasons are very strong says another year at the H.S. will leave him no more ready for business than he is now, whilst the other will give him what was [ ].

VW – [ ] to make a specialty last year. We wld. buy to board him at Mrs. Hugh Lee’s where he wld. have ladies & gentlemen as associates. but we are quite undecided. Love to all 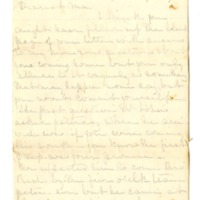 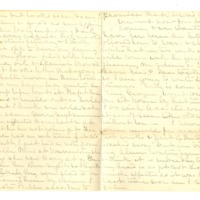